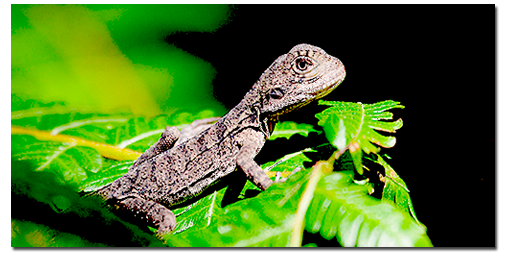 As its name suggests, the Australian water dragon is associated with water and is semi-aquatic. It can be found near creeks, rivers, lakes and other water bodies that have basking sites such as overhanging branches or rocks in open or filtered sun. The species is very common in the rainforest section of Brisbane Botanic Gardens, Mount Coot-tha in Queensland, and a monument has been built to them there.

There are anecdotal reports of a small colony living on the Sixth Creek in the Forest Range area of South Australia, which were probably introduced there during the 1980s by a local reptile enthusiast. This is many hundreds of miles outside their natural range.

The species inhabits eastern Australia and is always found near watercourses. The spread of Intellagama lesueurii howittii begins in Gippsland in Victoria and extends north to the Kangaroo Valley in New South Wales. After that the distribution of Intellagama lesueurii, which reaches north to Cooktown in Queensland begins. Australian water agers often enter urban areas such as Canberra, Sydney and Brisbane.

The south-east winds bring the mountains of the East uphill all year round. Temperatures are quite high throughout the year, thanks to the East Austro- ral current. It provides water temperatures of around 22 ° C for subtropical, tropical and tropical climates. In addition, there is a relatively high humidity, which ensures that the temperature differences between day and night remain quite small. The precipitation is usually distributed over the summer half year, with a total fall of between 1000 and 1500 mm.

In the mountains further west the temperatures and the precipitation decreases strongly. This can be seen, for example, in the fact that the winter of the capital Canberra regularly brings about night frosts, and even winter sports in the higher mountains.

The eastern water dragon grows to around 80-90cm in length, much of which is tail The colour consists of shades of grey or brown with a series of black bands on the back and tail and a black stripe on the side of the head behind the eye. The underside is creamy-white, although males may have a vivid red on some or most of the belly and chest. There are enlarged scales forming a crest down the middle of the head, back and tail. The legs are relatively long and powerful and the strong tail is flattened on the sides to assist with swimming.

The association of Australian waterbirds (Intellagama lesueurii) with other reptiles is initially difficult because of the then occurring terrarium requirements. Some associations are successfully practiced by some observers, but there are also indications in the literature, but in one "normal" water agitation center one species would suffer from the other.

The socialization with turtles should in principle not be practiced, since the droppings of the turtle can cause diseases in the water agams.

An accommodation due to lack of space is generally not recommended. The complete behavioral spectrum of the animals will probably only be seen in a group 1.2 or more, but there are also holders who have kept single animals for many years. It is also to be assumed that a not insignificant part of the population is also a loner in nature. There are also water agers here and there, which can not be kept in a group due to their aggressive behavior. The ideal condition is the grouping of one male and several females!

The Eastern Water Dragon is to determine the gender difference in the Kloakenbereich on the basis of the significant differences, such as preanal and femoral pores. It develops its gender-specific characteristics only at the age of 10-18 months. Often it is claimed that one finds with regard to the sex in freshly hatched young animals, this is not scientifically proven and one can not rely on it!

Recognition characteristics of the male 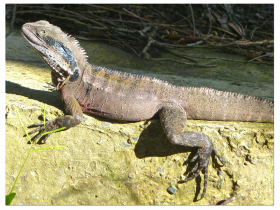 Often, a soldier is sold with the statement that it is a couple, this is not possible to determine! However, there are various indications, which suggests that a male young animal usually develops faster, looks more powerful and bigger than its female companions of the same age. Only one must have the comparison from the same clutch, and there is also no 100% security!

Recognition characteristics of the female 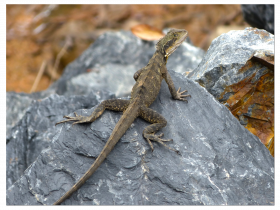 On the menu are crickets, various cockroaches, dachshunds, grasshoppers, rosaries, zophobas, flourworms, maggots, small lizards, snakes as well as young breeders, fish, nestjunge rodents and birds. These agamas are hunters who are adjusted to a certain range of movements of their prey, so they should also chase in the terrarium as often as possible and not passively wait for a feeding. A varied diet, instead of much, is advised to avoid overfeeding.

This versatility is made easier by choosing small food rather than a single large specimen. Insects from the trade, own breeding and meadow plankton are possible as food. There should be an optimal supplementation (link to the FAQ set?).

According to life in the tropical rain forest, this food will be rich in flowers and leaves, which can be felt in the terrarium. The animals seem to prefer colored ingredients such as carrots, various salads and fruit varieties. However, it is known that just sweet fruit, because of the fruit sugar, should rather rarely belong to the diet of the Terrarientiere. 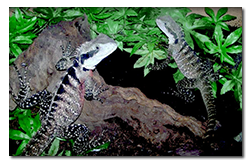 Water agamas are very shy and react with threats often with panic flight. Your preferred places to stay and sunbath are branches. However, with the smallest signs of danger, even from a high altitude, they fall into the water below. Against enemies of every kind, this is a quick escape.

The species prefers the water and has developed very good swimming and diving skills. Even with a two-hour stay in the water, they can hardly be identified, as only nasal tips look out of the water. Green water agamas prefer to live in small groups, which include a male and several females, which is also in the terrarium to strive.

They have an individual behavioral spectrum, which can be described as different characters. There is a habituation to a reference person, whereas they encounter strangers with restraint.

A male cradles the female, which can also lead to chase hunting. If the female indicates mating ability, the male can apply the so-called "neck bite" and the actual pairing takes place.

The female lays down a kind of tube, approximately 8 to 12 centimeters deep, for oviposition, laying 6 up to 20 eggs. In the incubator, a clutch develops at 24-30 ° C within 67 to 90 days, until finally the boys hatch.

A male cradles the female, which can also lead to chase hunting. If the female indicates mating ability, the male can apply the so-called "neck bite" and the actual pairing takes place. The female lays down a kind of tube, about 10 to 20 centimeters deep, for oviposition, and deposits 6 to 20 eggs. In the incubator, a clutch develops at 24-30 ° C within 67 to 101 days, until finally the boys hatch.

Young animals mainly eat insects and other invertebrates, and they should be targeted to vegetarian diet. In addition to the vegetarian diet, rodents, birds, fish, large insects and other invertebrates are in the beute spectrum. Thanks to a good climbing ability, the animals can chase birds. Since the water belongs in the same way to their area of life, they are there very successful fish hunters.

Under the conditions, as given in the terrarium, however, some principles are to be considered.

This site uses cookies. By continuing to browse this site, you are agreeing to our use of cookies. More Details Close